SHENZHEN, China, Nov. 13, 2019 /PRNewswire/ — Following the success of last year’s GITEX technology event, Absen (SZSE: 300389) was once again selected to play a starring role at this year’s event. Huawei, STC, TRA and Etisalat were amongst the companies that chose to incorporate Absen LED into their stand designs. In total, more than 1,000sqm of Absen LED were integrated in- and around the companies’ booths to deliver a visual punch, drive footfall and create memorable brand experiences for visitors. 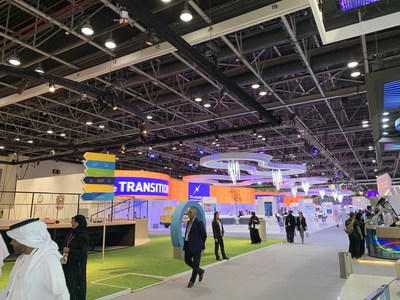 Saudi Telecom Company (STC) showcased its digital solutions under the theme “Tomorrow’s Solutions, Today”. The company deployed a massive transparent screen that was seamlessly integrated into the design of the stand. The 3.9mm pixel pitch LED video wall was used to present key messages around the company’s brand and event theme. Additionally, STC also used 4.8mm LED boards which were mounted to the ceiling to create a more immersive effect.

Telecommunications Regulatory Authority (TRA) featured two massive wave-shaped LED banners that covered the front of the stand. Measuring 144mx2m, the two spectacular screens were made of 2.9mm Absen LED, which perfectly reflected the company’s commitment to driving digital transformation in UAE under the theme “Where Technology Meets Future”. The vibrant colors and high quality images made TRA’s booth visually striking. Inside of the booth, a floor-to-ceiling column was decorated with four Absen 2.9mm LED displays. The four-sided LED column provided another centerpiece that elevated the experience for visitors on the stand.

Huawei, the leading global information and communications technology (ICT) solutions provider, once again partnered with Absen to showcase its Smart City and 5G ecosystem solutions using Absen’s Acclaim A27 series. A 1.5mm screen was used to create a Transportation Intelligent Operation Center and another, 2.5mm display, to create an Intelligent Video Brain & Operation Center. Absen’s A27 series boasts a 27.5″ size and 16:9 aspect ratio, as well as modular design, making it the perfect solution for corporate, retail and control room applications as it combines the benefits of both LCD and LED technologies.

Etisalat, the Emirati-based telecommunications company, also used Absen LED on its booth for the second year, creating a 3D robotic video wall. Each module on the screen moves independently, creating a unique and multisensory 3D video experience for the audience.

Other LED screens were placed at the entrances and exits as well as the hallways, where LED video boards were placed to play advertisements and display exhibition information.

“The GITEX Technology Week is the largest exhibition of IT industry in the Middle East region. It is also a big gathering of the latest AV technologies”, said Jet Liu, the Gulf market director at Absen. “LED technology is definitely an ideal digital display solution for its exceptional advantages of high brightness, accurate colors and ability to create large format displays of flexibility. We are glad seeing that our partners opted for Absen LED again in delivering reliable digital solutions for their customers”.