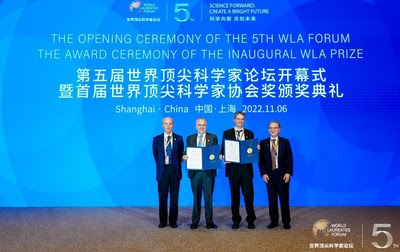 On the annual theme of the forum, “Science Forward: Create a Bright Future”, Roger Kornberg, Chairman of the World Laureates Association (WLA) and laureate of the Nobel Prize in Chemistry for 2006, explained that the world is changing fast, and science can help us deal with the challenges in the future. Before its official opening, various meetings and events, including WLA Zero Carbon Forum, WLA SHE Forum, the WLA Sci-T Conference, and the newly-launched WLA Laboratories Forum, have been held since 29 October. (Follow us at Twitter&Facebook @wlaforum)

Notably, the inaugural World Laureates Association Prize (WLA Prize) was awarded to two scientists at the opening ceremony on 6 November. The 2022 WLA Prize in Computer Science or Mathematics was awarded to Michael I. Jordan, Professor, Department of Electrical Engineering and Computer Sciences & Department of Statistics, UC Berkeley, for his fundamental contributions to the foundations of machine learning and its application. And the 2022 WLA Prize in Life Science or Medicine was awarded to German biochemist Dirk Gorlich, Scientific member and Director, Max Planck Institute for Multidisciplinary Sciences, for his key discoveries elucidating the mechanism and selectivity of protein transport between the cytoplasm and nucleus.

Michael I. Jordan, 2022 WLA Prize Laureate in Computer Science or Mathematics- “We have a tradition at Berkeley that when someone gets a prize, on the email, there’s a congratulation from everybody going around all day long. So it’s very nice you get 100 emails of congratulations.”

Dirk Gorlich, 2022 WLA Prize Laureate in Life Science or Medicine-“I felt surprised and very happy. I felt extremely honored. I should also say one should not do science just in waiting for an award. Science itself is very rewarding. It’s a great privilege to do science.”

The monetary award for each prize is 10 million yuan ($1.39 million). More information about the nomination of the WLA Prize in 2023 will be announced at the official website www.wlaprize.org.

Some 350 World Leaders From 157 Nations With Diplomatic Relations With North or South Korea Attended the August 11-15, Conference

Ahead of Microsoft Inspire, company shares how it is tuning partner investments for the cloud era, including updates to Teams, Dynamics 365, Azure REDMOND, Washington, July 12, 2019 /PRNewswire/ — On Thursday, Microsoft Corp. announced new investments in technologies and programs designed to support its partner ecosystem. The investments are aimed at helping optimize Microsoft’s […]